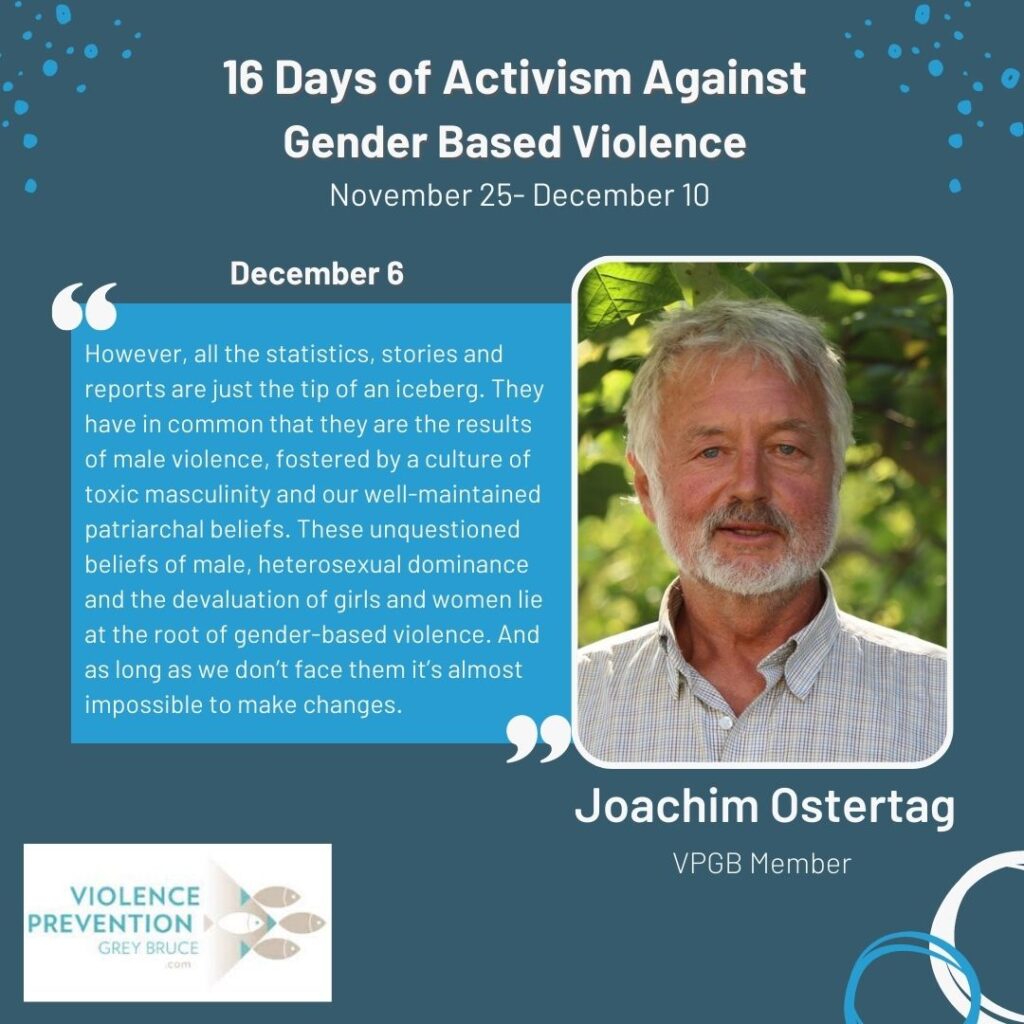 On December 6, 1989, a gunman intentionally targeted and killed 14 women because they were women. They studied engineering at Ecole Polytechnique in Montreal, and he killed them because he followed the belief that women were not to become engineers, a male dominated profession.  This was a most horrific act of hate against women who did not accept the status quo of the time. In the aftermath of this event December 6, was declared National Day of Remembrance and Action on Violence Against Women which gives us opportunity to reflect on where we are and what we need to do to make change.

The United Nations calls violence against women and girls “not only one of the worst forms of discrimination but also remains the most widespread and pervasive human rights violation in the world”. And this is true here in Canada and Grey Bruce, where Indigenous women and girls, women of colour and those who do not conform with the gender binary are disproportionally targets of violence.

Here are some facts:

In 2020, 160 females were victims of violent homicide, which averages to a woman or girl being killed every 2.5 days (it used to be every 6 days).

44% of women report experiencing some form of psychological, physical or sexual violence by an intimate partner over a lifetime.

Making up less than 5% of Canada’s population, Indigenous women make up 16% of femicide victims.

Transgender and gender diverse people in Canada were significantly more likely than cisgender people to having been physically or sexually assaulted at least once since age 15 (59% versus 37%, respectively.

And over the last years violence against women has been in the headlines in one way or another almost daily:

We heard about the sexual violence and rape culture which reaches back decades within Hockey Canada, and the way this organization silenced victims by paying  off claims of sexual abuse. When these allegations were “being brushed off,” it signaled that the career of the alleged abusers is more important than the survivors.

Reports continue about the RCMP’s toxic culture of sexualized violence decades where officers abused Indigenous women and girls as well as female RCMP staff. And class-action lawsuits against the RCMP are stacking up.

The extent of Gender Based Violence in the Canada’s military was laid out in a 2022 report , which found  “an underlying sexualized culture… that was hostile to women and lesbian, gay, transgender, bisexual and queer members”.  About a quarter of the women serving in the Canadian military said they had been sexually assaulted during their military careers, according to a government census.

Violence and sexist derogatory comments against female politicians, including gendered harassment focussing on female politicians’ physical appearance or attributes are common and often a deterrent for women to run for public office. In 2017, when Catherine McKenna was Environment Minister, an opposition minister called her “climate barbie”. A year later her  office was smeared with vulgar misogynist slurs. And this year Canada’s Deputy Prime Minister Chrystia Freeland, had misogynist insults hurled at her during an encounter in Grande Prairie, Alta.

The devastating history of genocide as documented in the Report on Missing and Murdered Indigenous Women and Girls continues: As I am writing this piece, we learn again that communities in Manitoba are honouring and remembering four Indigenous Women who were murdered in Winnipeg at the hands of a serial killer.

However, all the statistics, stories and news reports are just the tip of an iceberg. They have in common that they are the results of male violence, fostered by a culture of toxic masculinity and our well-maintained patriarchal beliefs. These unquestioned beliefs of male, heterosexual dominance and the devaluation of girls and women lie at the root of gender-based violence. And as long as we don’t face them it’s almost impossible to make changes.

We still pretend that we are surprised or shocked when we are confronted with stories of violence against women. But why? Why would our institutions including marriages be any different than the culture around them. The stories and statistics make us believe that the problem is somewhere else, or that they are isolated issues, and we point fingers at others and these institutions. We all need to be the change we want to see.

Having spoken with men and women for many decades in my work and as friends, neighbours and family, here are questions from a man’s perspective on how we can be the change we want to see?

As men we need to start with ourselves and ask difficult questions and have difficult conversations (even when we believe we are progressive feminists): How much do I really respect women as equals? How controlling am I, particularly when I don’t get my way? Am I supportive of my partner, or do I limit in any way her rights to empower herself?  Do I feel less as a man when my partner is powerful? Do I listen to what women have to say, or do my needs and wishes constantly override hers? Do I understand consent and look for an enthusiastic yes when I want sex? How honest am I in what I share with my partner? How do I relate to non-binary folks and how comfortable am I using non-binary pronouns? What is my response when I hear stories of gender-based violence? With children, how much do I raise them along traditional gender lines (boys will be boys, girls will be girls), and do I accept their gender orientation? Am I a really caring father to my kids? Am I an ally to women and LGBTQ2 people, or do I look the other way when I witness violence and/or sexist behaviour? How isolated am I emotionally, and can I share my thoughts and feelings with people? Was there trauma in my life that still impacts my relationships as I attempt to hide my vulnerability behind masks of toxic masculinity? Am I willing to overcome my internal obstacles to change? Am I willing to work with others and get engaged in ending the cycles of violence in my community?

We all and particularly men have a role to play in ending all forms of gender-based violence because we live in a culture that allows such violence to continue. You can help by adopting the following strategies. You can support a local organisation that address gender-based violence. Here in Grey Bruce: The Women’s Centre Grey Bruce and  the Women’s House Serving Bruce and Grey. Or support the Men’s Program at Canadian Mental Health Association.

You can organize or join a group of men in your community or workplace and support each other in making change and be clear that you are committed to gender equality.

Speak up and write letters to politicians and media when you see injustice in your communities.

Support women and LGBTQ2 folks when you observe violence.

Become an activist and take action on gender based violence in your community because it matters to you.

Explore the internet for information on gender-based violence. Here are a few: LGBTQueering the Narrative of Sexual Violence , Jackson Katz,  A Better Man or Anna Maria Tremonti, Missing and Murdered Women, 4 ways men relate to violence against women, Jackson Bird- How to talk (and listen) to transgender people, So coming back to “LGBTQ+”: does assigning this label lift a person up or hold them back?  and share them with friends and colleagues.

And, support change by attending vigils and public events on ending violence, including vigils for the 14 women who died in 1989 and all the victims of gender-based violence since then.