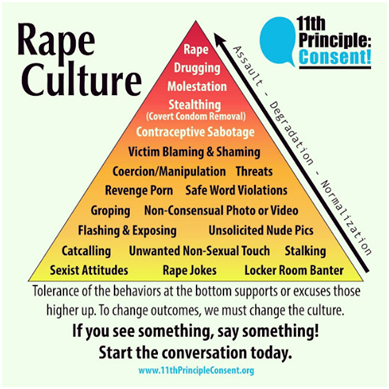 Rape culture.  You have likely heard the term; it is utilized widely across social media platforms.  But what does it mean?  And what impact does living in such a culture have on women and girls?

Rape culture is not new terminology.  Coined by feminists in the 1970s, its initial use was an effort to raise awareness and educate the public about the prevalence of rape.  The term connotes a society in which the dominant social attitudes contribute to the normalization and minimization of sexual violence.

Looking at the pyramid depicted in the graphic, the lower portion shows various actions and behaviours typically written off with “boys will be boys” attitudes, or that are not regarded as serious issues.  All of the behaviours listed are forms of sexual violence, but very few are actually seen as the violent acts that they are.  The acceptance, tolerance, and minimization of actions at the bottom of the pyramid becomes the foundation for the increasingly more sexually violent actions moving towards the top of the pyramid to occur.

Rape culture also means that sexual violence, and rape in particular, is frequently used as a plot device or character development tool in many genres of television shows and movies, ranging from media geared towards teenagers to horror to supposedly empowering feminist stories to graphic crime narratives.  Rape is used to create a softer side in so-called “difficult” women, add vulnerability, or just plain used for no apparent reason at all.  Those who defend the use of sexual violence in media speak to the commonplace aspect of this violence in our society as affirmation of its continued widespread use in media.  However, this constant portrayal of sexual violence in media contributes to the maintenance of rape culture and the attitudes that sustain it, by upholding the belief that sexual violence is somehow an inevitable part of life for women and girls.  Changing the depiction of sexual violence in media (and the frequency of these depictions), could bring about a cultural shift regarding the unavoidability and pervasiveness of this violence.

Rape culture contributes to persistent attitudes of victim-blaming, where sexual assault survivors are held accountable for their assaults, rather than responsibility being placed on perpetrators where it belongs.  Sexual assault survivors must field questions focused solely on their behaviour, including subjects such as what they were wearing, what substances they may have consumed, or their sexual history.  There is no expectation for the victims of virtually any other crime to answer these types of questions, nor are they held to account for their own victimization.  For sexual assault survivors, if any of the answers to these questions are not the “right” ones (spoiler alert: there’s usually never a “right” answer), then the survivor will be blamed for her assault, repeatedly, by any number of people, effectively stopping her from accessing the supports she needs.

Rape culture also creates a society where sexual violence prevention education themes are “don’t get raped”, rather than “don’t rape”.   Typical rape prevention tips are geared towards women’s behaviour and include things such as:

More accurate rape prevention tips would be directed towards rapists’ behaviour, and would include things like:

These kinds of lists, when shared on social media, are typically regarded as jokes or parodies, when in reality they put the accountability and responsibility exactly where they belong – on the shoulders of perpetrators.

Rape culture creates a constant and ongoing threat of sexual assault that affects women every day.  There are multiple things women do daily to try to prevent sexual violence, some becoming so deeply engrained that they are automatic.  Some examples provided by women when asked this question are:

If you are a woman, many of these are likely familiar to you, and there are probably more you could add.  If you are a man, what do you do to keep yourself safe from sexual violence on a daily basis?  My assumption is that for most of you, the answer is nothing, and that the question never even occurs to you.

In order to effect change, we need to move our society from rape culture to consent culture, shifting the accountability to perpetrators and away from survivors.  Consent culture means that all individuals have full bodily autonomy and that any sexual contact occurs with the ongoing, sober, and enthusiastic consent of all parties involved.  In consent culture, those who need to behave differently are rapists, and the narratives and questions society puts forward will focus on their behaviour, rather than that of survivors.  Change is much needed, within reach, and begins with a shift in societal attitudes towards all sexually violent behaviour.