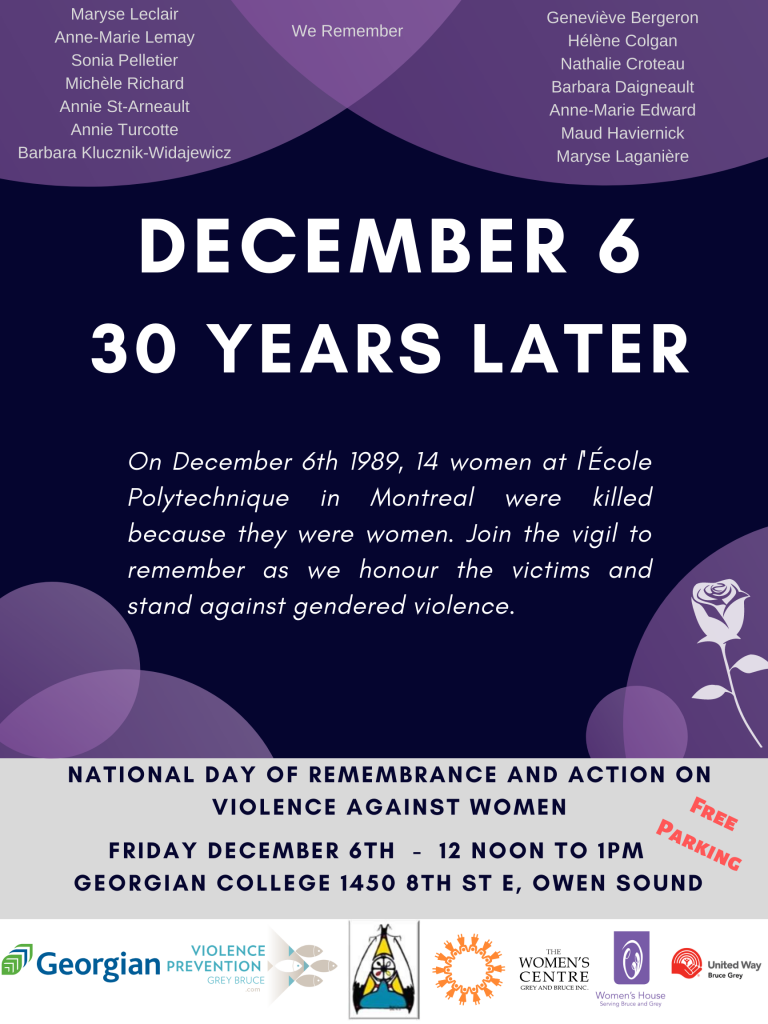 Thirty years ago on December 6th 1989, 14 women were murdered at l’École Polytechnique in Montreal solely because they were women. This year, on the National Day of Remembrance and Action on Violence Against Women, we mourn again the lives of the women who were the victims of this hateful act, and unite in our determined efforts to end all violence against women.

The 30th anniversary of the Montreal Massacre compels us to remember and to act.  It urges us to come together and end misogyny and all forms of violence against women.  Intimate terrorism and the war against women remains a harsh reality in Canada:

These numbers reflect the tip of the iceberg of acts of Violence Against Women. They do not speak of the daily experiences of physical, emotional, economic and sexual violence that women and girls in families, intimate relationships, at work, in the military and police, within churches and faith groups, in sport, and on campuses across the country.

Violence against women has many faces.  It impacts individual women and girls, their families, friends, neighbours and communities.  It can have a devastating impact on women’s work, parenting, employment, health, and safety.

Children who grow up with domestic violence have twice the rate of psychiatric disorders than those growing up in non-violent families.  Research shows that children living with violence have greater anxiety, increased rates of ADHD, violent behaviours, and substance abuse.  They are prone to believe in stereotypical gender roles and male privilege. Boys who grow up in violent families are at a higher risk to be violent towards women when they grow up.  Girls are at a higher risk of being submissive to men and believing that men’s violence and abuse is their fault.

The story of the man who targeted and killed the 14 women in Montreal is an extreme example of such intergenerational violence. He witnessed his mother being assaulted by his father.  As an adult man he acted out his misogynist beliefs against women, whom he believed took away men’s jobs by becoming engineers.

Violence against women continues to be a difficult topic to talk about, maybe because so many of us are directly or indirectly affected by it. Some of us grew up with it, some have used violence, some have been victims and witnesses, and the trauma of those experiences often continues to live in our bodies and minds.  It is still an issue surrounded by shame and secrecy that is hard to speak about openly.  It can be difficult to recognize the depth and pervasiveness of this problem, even in the face of statistics.

Half of all women in Canada have experienced at least one incident of physical or sexual violence since the age of 16 and 57 % of Indigenous women have been sexually abused. Sexual assaults account for about 33% of all crimes committed against Indigenous women, and 10% of all crimes committed against non-Indigenous women.  In Canada, disabled women experience sexual violence at three times the rate of non-disabled women and over 6000 women and children live in shelters at any given time because it is not safe to be at home.

Violence against women is the result of deeply rooted gender inequality that is part of our western and colonial culture that traditionally values male power over women.  We live with daily messages and actions sanctioned by our political, justice, marital and religious institutions and popular culture that reinforce narratives of hate and violence against women (videos, pornography, victim blaming, inequality, and the systemic oppression of women).  The narratives and the beliefs in hyper-masculinity, homophobia, male superiority, and hegemonic thinking all increase men’s sense of entitlement to women’s bodies and lives. That entitlement contributes to the physical, emotional, spiritual and sexual abuse of women and girls in Canada.

We all have an important role to play in ending violence against women. So much has been done and we can build on this great work by:

December 6th, the National Day of Remembrance and Action provides opportunities to reflect on how we will personally and as communities be the change we want to see in the world. We owe this to the 14 women whose lives were destroyed in 1989 at École Polytechnique and to the women who lost their lives since then.  On this 30th Anniversary of the Montreal Massacre we can commit to a different future.  A future where women and girls are safe, loved, respected and equal in their families, their relationships, and their communities.